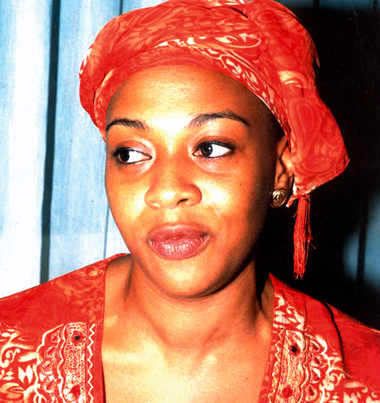 Gunmen suspected to be assassins on Sunday broke into the Abuja home of Senator Gbemisola Saraki, shooting one of her security men in the process.

The Senate swiftly reacted to the incident, urging the Inspector General of Police, Mr. Ogbonna Onovo to immediately wade into the matter to ensure that the culprits were brought to book.

Our correspondent gathered on Sunday, that Saraki was not at home when the men struck in the early hours of the day.

The gunmen, numbering eight were said to have gained access into the residence located at the Maitama District of Abuja, after laying wait outside the fence for several hours.

They were said to have ransacked the building while holding the domestic aides of the senator hostage and demanded to know the whereabouts of the senator.

Our correspondent gathered that the gunmen eventually left the senator’s residence after their efforts to get her failed to yield any result.

Saraki, who is the younger sister to Governor Bukola Saraki of Kwara State, according to sources closed to her, travelled out of the country on Friday, without telling anyone where she was travelling to.

Reacting to the incident on the telephone, an obviously shocked Saraki wondered why anyone would be after her life, as she did not believe in a do-or-die politics.

She said, “I thank God that I survived the attack but it is shocking that some people will come after someone’s life because of power. I had received a threat message about a week earlier but I never thought it was going to be that sudden.

“People should realise that power belongs to God and I also firmly believe that my life is in God’s hands. We advise the security agencies to be more vigilant as the 2011 election year comes closer.”

But the police have said that it was wrong to conclude that the attack on Saraki was assassination attempt when they were still investigating the matter.

The Force Public Relations Officer, Mr. Emmanuel Ojukwu, who spoke with our correspondent on the telephone on Sunday, said that the police have already commenced investigations into the issue.

Ojukwu added that the police were working on the theory that the attack could either be house breaking or burglary.

He, however, said that no arrest has been made.
Source: Punch Newspaper – www.punchng.com