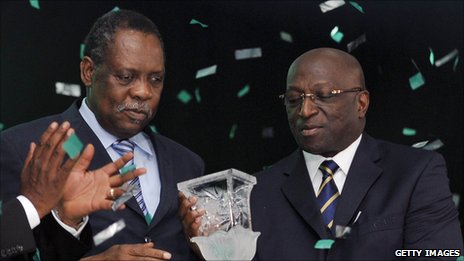 Two of African football’s most powerful men have been accused of taking bribes related to Qatar’s 2022 World Cup bid.

The accusations were made by British MPs at the culture, media and sport committee in the House of Commons.

MP Damian Collins said the evidence against the Fifa pair was submitted by the Sunday Times newspaper.

Collins said: “The Sunday Times’ submission, and this is to be published by us later, claims that 1.5million dollars was paid to Fifa executive committee members Issa Hayatou and Jacques Anouma who went on to vote for Qatar.”

Hayatou, a Cameroonian, has led Caf since 1988 while Ivory Coast’s Anouma has been on the confederation’s executive committee for the last four years.

The information submitted to British lawmakers also claimed that Qatar, who won the right to host the 2022 World Cup, employed an African fixer with close connections to Hayatou to arrange deals for votes.

“Zen Ruffinen claimed that Qatar was using Diallo to arrange financial deals with the African members in exchange for World Cup votes.

“Further inquiries established that Diallo had been employed by the Qatar bid and was also the “charge de mission” (chief assistant) to Issa Hayatou.”

Adamu, who denies the claims, was banned for three years after he was caught seeking bribes from undercover reporters and has now taken his case to the Court of Arbitration for Sport.

The latest developments mean no fewer than eight executive committee members – one third of the total of 24 – have either been alleged to have been or already found guilty of impropriety in relation to the 2018 and 2022 World Cup bids.