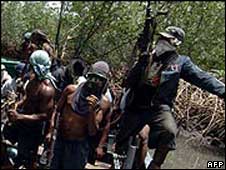 Four people were on Sunday night shot dead at a beer parlour in Bulunkutu, a Maiduguri, Borno State suburb even as the Islamic sect gave conditions before it could ceasefire.

Among the conditions given for truce was the resignation of the newly-elected governor, Alhaji Kashim Shettima, prosecution of his predecessor, Senator Modu Ali Sheriff and strict practice of Sharia law in at least 12 Muslims-dominated states in the North, equivalent to one-third of the country. The group also demanded the prosecution, under Islamic law, of some politicians, traditional rulers and security personnel, who were responsible for alleged extra-judicial killings of its members in the 2009 uprising in Borno.

In the Sunday’s attack, the state Assistant Police Commissioner, Zakari Adamu, said: “Four people were killed in an attack by gunmen suspected to be members of Boko Haram sect at a beer parlour in the Bulunkutu suburb of the city last night.

“The gunmen opened fire on people drinking in the beer parlour, killing four before engaging in a shootout with police, who were attracted to the scene by gunshots”, Adamu said on phone from Maiduguri. The assailants, however, escaped police arrest. Although Borno is one of the 12 Northern states that have adopted the Sharia law, which bans consumption of alcohol, residents of the state still drink beer openly.

Sunday’s attack came a week after multiple bomb explosions and shootings, targeting two police stations and a church, rocked the city of Maiduguri. At least, 14 people, including a Pentecostal church pastor, were killed. Police have intensified surveillance in Maiduguri since last week’s attacks, leading to the arrest of 19 suspected members of the sect and the recovery of weapons, including two rocket launchers and Kalashnikov rifles.

“We arrested 14 people along with the weapons while five others were arrested for bringing in bombs into the city”, Adamu stated, adding that the suspects have been taken to the Force Headquarters, Abuja for further interrogation.
Meanwhile, in a terse statement written in Hausa and circulated around Maiduguri, yesterday, Boko Haram gave strict conditions for truce in the over two years uprising in the state.

Signed by one Usman Al-Zawahiri, who claimed to be the spokesman of the group, and entitled; Conditions for Dialogue with President Goodluck Jonathan and Governor Kashim Shettima’, the group used the statement to react to recent overtures for talks by Governor Shettima and the calls on government to grant amnesty to detained members of the religious sect.
“We demand for the strict enforcement of Sharia legal system in the Muslim-dominated states in the North as part of conditions for dialogue with the government”, the group said in the statement. The Islamic sect also demanded the prosecution of the immediate past governor of Borno State, Senator Modu Sheriff for the killing of its leader two years ago as well as the release of all its detained members.

“If the government meets these conditions, we will agree to a ceasefire and enter into dialogue with them”, the statement added.
Boko Haram, which means ‘western education is sin’, launched its operation in 2009, but was checkmated by security forces, leading to the killing of its leader, Muhammed Yusuff.

Since then, the sect had been launching violent attacks on Borno State and its environs, killing several persons. It also claimed responsibility for some of the bombings in the northern part of Nigeria as well as attacks on a number of police stations across Borno.
Boko Haram claimed responsibility for the January killing of the governorship candidate of All Nigeria Peoples Party (ANPP) in Borno State, Alhaji Modu Gubio and six other persons, including the brother to the immediate past governor, Alhaji Modu Sheriff. It also claimed to have masterminded the recent killing of the brother of Shehu of Borno and bombing of the state office of National Programme on Immunization (NPI) early this month. In its statement, yesterday, it boasted that the deployment of more security personnel would not deter its members from carrying out attacks in Borno State.