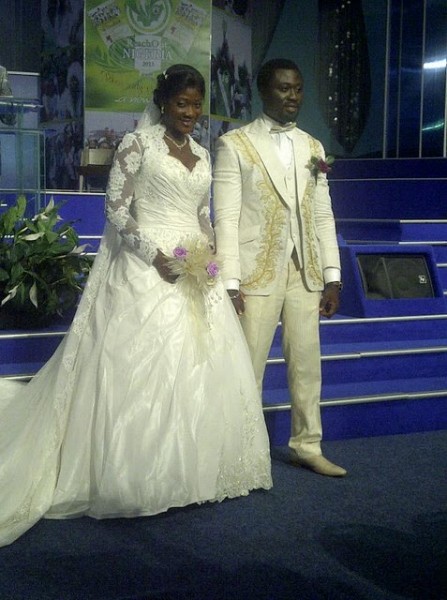 Although the storm that gathered over the marriage of Mercy Johnson and Prince Odianosen Okojie has finally dispersed with Mercy coming out triumphant against all odds. One must say that some rather “interesting” events characterized the wedding proceeding

Mercy Johnson’s wedding had very heavy security, the heavy presence of Naval police was felt at the traditional marriage between Mercy Johnson and Odi Okojie. Mercy’s father, Mr.Daniel Johnson, a retired Naval officer, had sought for heavy security at his house while the ceremony lasted. Besides that, about five bouncers followed Odi Okojie around.

It was also noticed that there was no photograph order and photojournalists who thronged the venue were dissapointed as they were turned back at the gate. Those in the hall who tried to take pictures of the event had ugly experiences as they were either booted out or has their phones seized.

There were also reports of a mentally deranged woman showing up at the entrance of Christ Embassy, the venue of the white wedding, the woman was said to have railed curses on Christ Embassy for wedding “glorified prostitutes” in their church. Pastor Chris Oyakilome who had been penciled down as one of the officiating pastors of the event was conspicously absent as he was said to have an important assignment in the UK.

Also, it was impossible not to notice that the line, “And if there is anyone among the congregation, who does not want this marriage contracted should signify now or else forever remain silent” was missing from the wedding programme distributed at the church premises and was not even mentioned by the officiating pastor, Pastor Tom Obiaze. It was obvious the church and the two families coming together in marriage did not want any disruption.

There was also very heavy security in the church, Mercy Johnson and Odi were said to have sneaked out of the venue leaving behind the guests who thought the couple were still present as they did not take their Hummer limos and Mercy’s Bentley. The highlights of the event were the points at which the officiating pastor asked Mercy to make her marital vows and when Genevieve Nnaji stepped out to meet Mercy during the event. Mercy Johnson was said to have cried at these two occasions during the wedding. First because of the controversy that had almost sabotaged her wedding plans and because according to her confidants she considers Genevieve to be her role model and Genevieve’s appearance at the wedding meant a lot to her.
Click Here To View More of Mercy Johnson’s Wedding Pictures