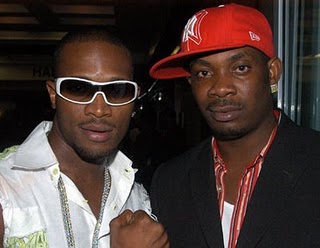 D’banj’s new song – Oliver Twist which has gone viral since it hit the media and internet portals has been banned by the NBC. The song had gained enormous publicity largely as a result of the Oliver Twist competition organised by D’banj and Don Jazzy. People were asked to send in videos of themselves dancing to the Oliver Twist song via mail.  Don Jazzy said, “The winning video would be chosen based on entertainment value and creativity,” adding that there will be five winners with cash prizes of $2, 500, $2, 000, $1, 500, $1, 000, and $500 respectively.

The Nigerian Broadcasting Corporation banned the song because it contains what the NBC has termed to be lewd lyrics, in the lyrics of the song, Dbanj supposedly eulogises Omotola Jaleide’s buttocks part of the song goes, “I like Omotola, (because) her y*ansh is bigger.” The NBC was reported to have thus issued a circular to all radio and television stations to stop playing the song.

However, our findings reveal that the lyrics of the song which have been publicized do not contain the line “I like Omotola, (because) her y*ansh is bigger.” as quoted rather the lyrics of the Oliver Twist song says “I like Omo-tola, cause people like her”. Except there is a different version of the song, the lyrics are being misquoted. The song however does say “I like Nicki (probably Nicki Minaj), her Nash is bigger”.

Reacting to the alleged NBC ban on D’banj’s latest song “Oliver”, Mo’Hits C.E.O, Don Jazzy downplayed the censor saying that “they only banned it because they have the power to do so”. Popular rapper Ruggedman was first to spread the news via Twitter saying: “NBC strikes again. 1st @IAM2SHOTZ Supermandead is banned. Now its @iamdbanj Oliver Twist. Na wah o cc @DONJAZZY’, @Ruggedybaba tweeted. The rapper further disclosed that he got the information on the ban from radio station Cool FM Abuja.

He will hum the melody even in his sleep. He’ll probably record his own version of the Oliver video sef lol. He is doing his job so let’s allow him exercise his power. It’s allowed. May God bless him and his hustle? No long thing”. Ruggedman continued.

Recently, the NBC banned 2Shortz’s single ‘supermandead’ because of the use of the word ‘alomo”.

“Please, worry not about the banning of Oliver o, e dey happen. We are kinda used to it now. Ijebu garri no dey do advert but e dey sell.”

Excerpts of the lyrics of Oliver Twist below:-

See I like Beyonce, But she day with Jigga
I like Nicki, her Nash is bigger
I like Rihanna, she day make me take okada
I like Omo-tola, cause people like her
I like Genevieve, I told her she’s so sweet
And now I put my ring, But she no dey take garri.
It’s not about what you know, you cannot pay me doh
I wanna like them all,
I know is wrong, but the truth is bitter