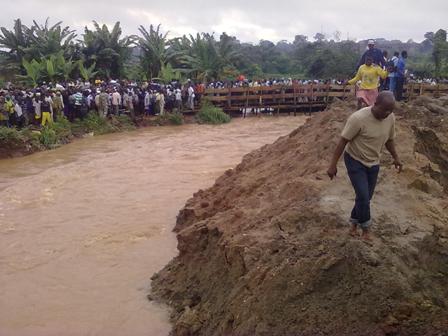 The rain which fell continuously from the night of Wednesday 27th till the early hours of Thursday 28th June 2012 has left the residents of Apete in Ido Local Government Area of Oyo State in distress once again.

The troubles of the residents of this area started in August, 2011, when a heavy rainfall which claimed many lives in the state washed away the main bridge linking the community to the main Ibadan metropolis. Within two weeks of this first incident, a temporary bridge was constructed which made life easier for the people as commuters moved about hardly noticing any difference.

The temporary bridge was however pulled down some weeks ago when work was about to start on a permanent one. In its place, a wooden pedestrian bridge was constructed for people to use pending the time of the completion of the permanent bridge. This project, the residents were promised, would be completed in six (6) weeks.

Over the weeks, the periodic rainfalls have gradually turned the wooden bridge into a deathtrap. Apart from this, car owners have to seek for other places in tow to park their cars over night. As a result of this, more than five (5) cars have been stolen. The known two other routes that link Apete to the rest of the city are hardly motorable. Why didn’t the government fix at least one of these before pulling down the bridge? Why did they have to wait till the beginning of another raining season before embarking on this project? The same can be said about other similar projects across the city of Ibadan, namely the project around Awolowo Avenue (Bodija) along the UI – Secretariat road, and the Mokola roundabout project. These are projects that spokespersons of the government in power in Oyo State never fail to brag about at the slightest opportunity.