Controversial personality- Charly Boy, who is a grown man but still retaining the name that carries BOY, was said to have taken this particular picture showing him in a cofin all by himself. If another celebrity had taken such a picture and posted it, Nigerians would have made so much noise about such an abnormal occurrence, but since it is the man known for ‘out of space’ actions, most Nigerians just laughed over it and said ‘IT’S CHARLY BOY’. What kind of man does that? 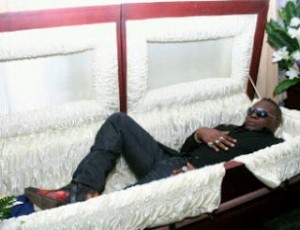