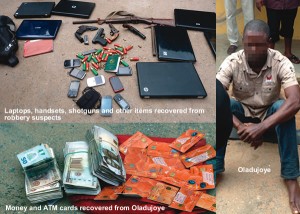 Dare Oladujoye, a driver with Zenith Bank, has been arrested by members of the Lagos State Police Command for allegedly being in possession of 19 Guaranty Trust Bank ATM cards and the sum of N652, 000. The suspect had been using the cards to withdraw money from an ATM at Ogba branch of GTB when a security guard raised the alarm.

Mr. Umar Manko, the Commissioner of Police for the state police command, said as of the time of his arrest, the suspect had withdrawn N652, 000 from the ATM. According to Manko, “On July 26, 2012, around 8:30pm, there was a distress call that there was commotion at GTB, Ogba branch. On getting there, the suspect was seen with 19 ATM cards.

“He is an employee of Zenith Bank and we wondered what he was doing with the 19 cards. He was arrested and as of the time of his arrest, he had cashed N652, 000. The matter is under investigation.”

Dare has however denied stealing the ATM cards. He said that whenever he lent people money, he would collect their ATM cards as collateral and return them after payment: “I usually loan people money and I’ve been doing it for over a year. Whenever I loan people money, I will collect their ATM cards and their Personal Identification Numbers. When they repay me, I return their cards to them… However, if they don’t pay me back in cash, I go to withdraw money from their accounts through the ATM.”