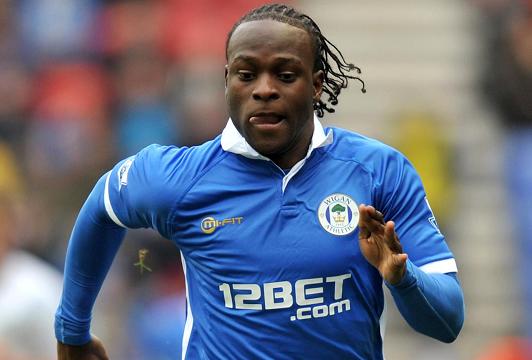 Wigan FC, determined to get maximum financial value from the sale of Victor Moses has so far rejected three offers from Chelsea.

Chlesea, also determined to land the highly rated midfielder, is reportedly lining up a fourth bid.

This new bid could be worth up to £9million, reports say.

Wigan’s chairman Dave Whelan says Moses is worth £10 million, adding that he is only interested in a ‘cash deal’.

It is now understood the two clubs are close to reaching an agreement, with Chelsea prepared to pay £6m up front and another £3m in performance-related add-ons, according to the London Evening Standard.

Chelsea have chased several attacking players over the summer, including Hulk, Willian, Andre Schurrle and Robert Lewandowski, but Moses appeals to them because of his potential and the fact he will also qualify as a home-grown player for the Champions League.

Chelsea must pay cash to land Moses, who Wigan’s second goal in a 3-1 win over Mitchendof in a pre-season game in Austria.

Wigan chairman Dave Whelan has declared he will not let Moses go on the cheap, telling the Champions League and FA Cup holders to put up or shut up.

Whelan said: “They need to pay the brass up front. We don’t want any part-exchange deals they have offered.

“Victor is one of the most exciting young talents around, so little wonder Chelsea want him, but if they want him they are going to have to pay the price.

“We are not interested in picking up one of their players on loan or in part exchange.

“They know the price for Moses.”