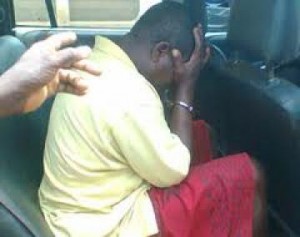 A 47-year-old fetish priest who fathered nine kids with his daughter, Agbofa Yao Hateka, has pleaded with a Sogakope Circuit Court to forgive him his sins as he would not do it again.

He has so far made two appearances in the Sogakope Circuit Court for having nine children with his daughter, four of whom were dead.
Agbofa Yao Hateka was in the Sogakope court on 12th and 13th July charged with incest.

According to the prosecutor, Inspector Emmanuel Atsor, the case was reported to the Dabala Police by the chief of Ashagborkope, Togbui Sekpetey II, who is also a tax collector.

The complainant told the police on June 7th 2012 that the accused was married to his biological daughter, Baby Hateka, with whom he had nine kids.

Yao Hateka allegedly impregnated Baby when she was 11 years old and subsequently had eight other children with her.
Out of the lot, there were now five kids aged 14, 12, 3, 2 and a month-and-a-half-old.

During her interrogation however, Baby Hateka told the police she had eight children with her father out of which three died, contradicting the accused person’s narration that he had only a two-year-old baby with his daughter called Dodzi.
The accused would not allow anybody to intervene as he allegedly threatened people with death if they meddled in his sexual relationship with his daughter.

He allegedly threatened to invoke the spirit of his gods to deal with meddlers. The accused told the court that he was both a farmer and a fisherman, although the prosecution witness claimed he was unemployed. Before his arrest, the accused told the police that his daughter suffered from sickle cell anaemia, and had come to stay with him from a cocoa-growing area.

Togbui Sekpetey II had earlier fined the accused a fowl so his daughter could be cleansed before reporting the matter to the police.
The case has been adjourned to 20th July 2012 for judgment.