It was discovered recently that this astounding player owns a fleet of cars that camera couldn’t just cover it all at a shot. The question ravaging people’s minds has been ‘what his he doing with such numbers of cars?’ Comparatively many presidents of many countries don’t go on the road with such a car-blessed convoy, and neither does he.

This man could actually be looking at a new career as a car dealer. 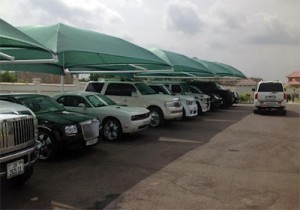