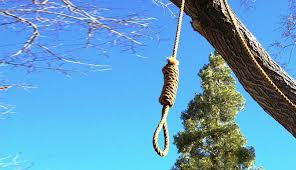 Reports have it that a  55-YEAR-OLD man from Bikita suspected to be having an illicit affair with his young brother’s wife allegedly committed suicide by hanging himself after the issue surfaced, police confirmed last week.

Narrating the ordeal, Asst Insp Mazula said on the fateful day Mr Elliot Mabasa (35) came from a beer drink and allegedly started to assault his wife Ms Fambirai Magadza (33) over allegations of having an extramarital affair with his elder brother, Fungai Mabasa.
Fungai, who lived a stone’s throw away from Elliot’s homestead, heard Magadza crying for help and he allegedly sent his wife Miriam (59) to go and restrain Mr Elliot from beating his wife.

When she arrived it is alleged that Elliot told Miriam that he was beating his wife because he had received information to the effect that his wife was having an extramarital affair with Fungai. Miriam is said to have gone back and allegedly told Fungai what she had heard as the reason behind the assault.

It is alleged that Fungai could not deny nor confirm the allegations but instead sent Miriam to a certain homestead in the village with a container to buy traditional beer where upon her return she found him having committed suicide and his body was hanging from the roof of their matrimonial bedroom hut.

She rushed to alert other villagers who arrived at the scene before informing the police who ferried the body to Gutu Mission mortuary for postmortem.