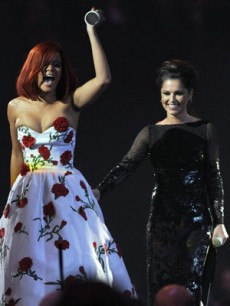 Jamaican athlete Usain Bolt has revealed his celebrity crushes and says Cheryl Cole and Rihanna are “the most beautiful women in the world.”

Taletela reveals that Usain, who won gold in the 1oom dash during the 2012 Olympic Men’s 100 metre race while also breaking the record for second fastest time, says he is smitten by Girls Aloud singer Cheryl who he would like to take to dinner.

“London has some really beautiful women, I can’t help but notice them. Cheryl Cole is always in the media and I can see why. She is so beautiful,” Usain told the Daily Star.

“I think for me it is between her and Rihanna for the most beautiful woman in the world.”

Speaking before his victory last night, Usain added: “If Cheryl wants to come and watch me in the final I might even take her out for dinner afterwards.”