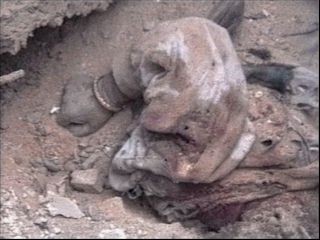 Reports have it that a 27 year old man went to the police last week to confess a crime he committed eight months ago.The incident happened in Delta state and according to him, the spirit of the woman he killed was haunting him.

During his confession which he gave to the police, he and some men kidnapped a prophetess in December 2011 and buried her alive a few days later in his compound. He didn’t say why he kidnapped the woman.

When the police arrived at the grave Emmanuel from Owahawa, Ughelli South LGA took them to, they exhumed the body of a woman fully dressed in a white garment church attire, jewelry and all.

Emmanuel and another man have been arrested while the police is looking for relatives of the yet to be identified prophetess.