Alicia Keys has been working on her forthcoming album ‘Girl on Fire’ for a while as well as release the single of the same name and she was on time to perform the song at the MTV Video Music Awards.

Alicia Keys took the stage Thursday night at the Staples Center to make her official comeback, and she rocked the MTV VMAs crowd with her new single “Girl On Fire.” Nicki Minaj’s rap and Olympian, Gabby Douglas’ appearance added cheers from the audience.

Alicia Key’s baby boy, Egypt and hubby, Swizz Beatz were looking on inside as their love wowed the fans with her great voice and gorgeous body.

Speaking about Alicia’s son, Egypt, Nicki says on twitter “@NICKIMINAJ: … he’s like the cutest baby of all time>”. We also think he’s cute. 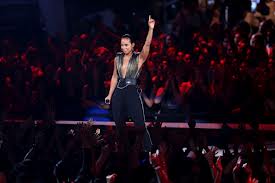