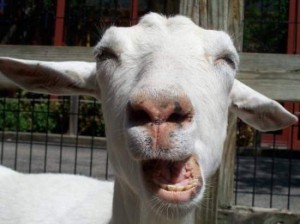 Could this possibly be an explanation to the story about a cleric, one pastor Oloruntoba Ibitoye, who, on Monday bagged a nine-month jail term after pleading guilty to a crime of stealing a sheep valued at N3,000 in front of the owner’s residence at Amoyo area of Ilorin, the Kwara State capital.

Ibitoye had been charged before the Ilorin Magisterate’s Court, and according to the prosecution, the complainant, one Mrs Florence Adebiyi, reported at the police station in Ganmo, near Ilorin, that the convict stole her sheep valued at N3,000 in front of her Amoyo residence.

The prosecution said the sheep was recovered from Ibitoye by the police. Ibitoye pleaded guilty to the offence and begged for leniency. However, police prosecutor, Inspector Mojisola Olamokun, applied for summary trial, which was granted by the court. The Magistrate, Mrs. Mariam Qudus-Salahu, sentenced him to nine months imprisonment without an option of fine.