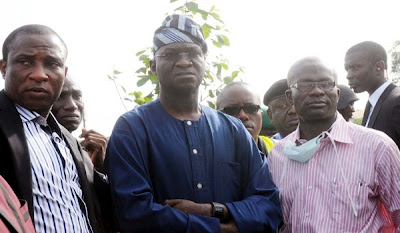 After holding a closed-door meeting with some of the families at the Government House in Ikeja.Gov, Gov. Babatunde Fashola of Lagos State disclosed this on Thursday while speaking to newsmen shortly

He said that those who were issued certificates were families of 141 victims whose bodies had been successfully identified so far, adding that 51 families were yet to collect the certificates.

The governor also said nine bodies were yet to be identified, explaining that the DNA samples of five were not initially supplied by their families while the remaining four could not be identified immediately.

“We have, however, taken fresh samples of the five bodies and have in fact sent them abroad.

“If that is successful, it will leave us with how to proceed with the remaining bodies because we cannot identify them,” he said.

Fashola said talks were in progress with the families on holding a memorial service to honour the victims and build a cenotaph around the crash site or any other site to immortalise them.

He praised the understanding and patience of the victims’ families, saying even in their moments of grief, they worked with the government in resolving the problem of identification of the bodies.

“The crash, though very regrettable, should make the nation ponder about all that is wrong about the aviation sector and do the right things to reposition it,” the governor said.