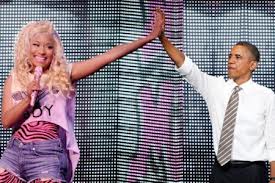 We all thought Nicki Minaj was anti-Obama. She even got a couple of death threats due to a rap verse that suggests that she was(“I’m a Republican, voting for Mitt Romney, you lazy b*tches is f*cking up the economy”) but as it turns out, Nicki is actually an Obama supporter.

In a response to Nicki Minaj’s rap verse, President Obama told 95.3 in Orlando, Florida on monday morning, “She likes to play different characters, so I don’t know what’s going on there.”

Tweets from Nicki Minaj’s TL confirms her support for Barack Obama. Here are some of the tweets.

“@BIGGEST_BARB: if thats not winning, idk WHAT is. having the PRESIDENT tell bitches what your verse means. wow.”

“@NICKIMINAJ: Awesome! Now I can tell my grandchildren that the 1st black President of the United States took the time to address a Nicki Minaj question”

We are obviously wrong about our judgment of her rap. But Nicki seems content as those words did what Nicki intended and she’s happy about it.