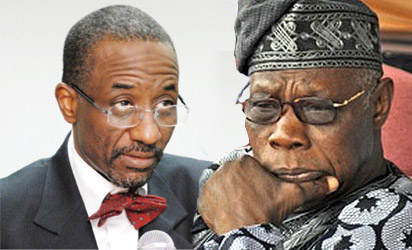 An interesting twist has been introduced into the controversies surrounding the proposed single N5000 note continue, a new dimension has been brought into the whole scenario. It will be recalled that, about a week ago, former president, Olusegun Obasanjo condemned the new note, saying that it will kill production process in the country. In an apparent response to this move by the former president, the governor of the Central Bank of Nigeria (CBN), Mallam Lamido Sanusi, has fired back.

In his reply, the CBN governor said he could not be sure that Obasanjo made the statements credited to him. Sanusi started by slamming the former president who he said introduced several large denominations including N100, N200, N500 and N1, 000 notes, and this did not affect Nigerians adversely either through inflation or other economic indices.

According to him, “This is an interesting country because my uncle or my father who was our former Head of State, General Obasanjo, who we all know is a very successful farmer, is a very bad economist; especially for saying that the introduction of higher denomination will cause inflation and improve hardship… Obasanjo introduced N20, N100, N200, N500 and N1, 000. He had introduced more higher-denomination currencies in Nigeria than any other head of state.”

He continues: “He did N100 note in 1999, he did N200 in 2000, he did N500 two years later and in that period, inflation was coming down because it was accompanied by prudent fiscal and monetary policy… It is wrong for somebody, like Obasanjo, who had done this to stand up and say introducing a higher denomination will cause inflation… We all know that we cannot have inflation by printing higher bills if you don’t increase money supply and this is simple economics.”