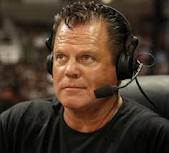 WWE Legend, Jerry Lawler has suffered a heart attack on monday night raw. A representative for the WWE told TMZ, “Jerry ‘The King’ Lawler suffered a heart attack while commentating during Monday night’s broadcast of ‘Monday Night Raw’ in Montreal.”The representative continued, “We are hopeful Jerry makes a full recovery and returns to WWE in the near future. Our thoughts are with Jerry and his family.”

The wrestling legend was rushed to the ER last night after collapsing at a WWE event in Montreal, Quebec. Reports have it that he is now breathing on his own. 62-year-old Lawler was sitting ringside running match commentary when he suddenly collapsed. He was rushed to a nearby hospital for treatment after an emergency response crew performed CPR on him. The WWE says Lawler is now breathing on his own.