A source yesterday said security agencies have arrested over 100 suspects, including students, in Mubi and adjoining communities over Tuesday’s killing of 25 people, many of whom were students of the Federal Polytechnic and the School of Health Technology, Mubi in Adamawa State. 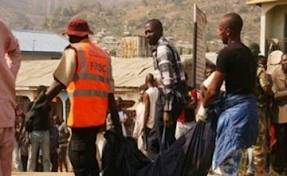 Although the Adamawa State Police Command refused to give the exact number of those arrested and their identity saying that doing so at this stage would jeopardise investigation, a source within the security circle said over a hundred suspects had been arrested as hunt for the killers continue. A source in the students’ affairs unit of the Federal Polytechnic, Mubi also said one of those killed was among the newly elected executive members of the Student Union Government.

Police spokesman, DSP Muhammed Ibrahim told reporters that “many arrests” had been made, and that investigators were following leads. He said details of the arrests made will be made public in due course.

“The force headquarters would come out with more information on the incident. Investigation into the killings is in progress but honestly there is insider factor because majority of the victims were killed after the assailants had called them by their names,” he said.

“It will be wrong to say all the people arrested are guilty or are directly connected with the crime. We have many people in our custody but those found innocent would be released. I will not tell you the actual number of arrest made,” he said.

Reports say that some of the corpses have been taken to the Specialist Hospital in Yola for autopsy while families of some of the deceased have been making efforts to recover the bodies of their loved ones for burial.

“I am finished, my hope is gone,” a middle aged woman said as she wailed in front of the hospital source told Daily Trust. He said the Mubi Specialist Hospital’s morgue was a gory sight as some of the victims were being stretchered to the morgue in a pool of their own blood.

“You could see that some obviously died of gun shots while some appeared to have been slaughtered like rams,” he said.

Governor of Adamawa State, Murtala Nyako has condemned the attack. According to a statement by his Chief Press Secretary, Maijama’a Adamu, the governor said, “The killing is condemnable and heinous. There is no justification for it and we wish to call on law abiding citizens not to take the law into their hands.”

“The state government will give security forces all the support they need in carrying out investigation that will lead to the arrest of the people behind the attack,” the governor said.

The government has therefore sent a high level delegation to Mubi to commiserate with authorities of the affected institutions and the families of the deceased.

A source at the Federal Polytechnic, Mubi said both Muslims and Christians were victims of the murder. “Some of them were shot with assault rifles while others were slaughtered with knife,” the source said.

A lecturer who pleaded anonimity said, “As you can see, I am now in Yola because it will be risky for me to stay in the campus because nobody knows what will happen next. We hope the mystery will be unravelled soon.”

He said some of those killed are students that recently won executive post in the students’ union government (SUG) election held in the school.