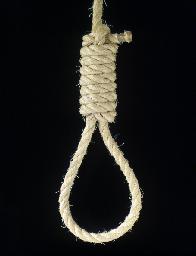 A 31-year-old electrician, Abdulkadiri Issa, was on Wednesday sentenced to death by hanging at a Lagos State High Court in Ikeja for the murder of Mrs. Catherine Kate-Amadi in Ebute-Meta, Lagos. Issa was condemned to death for stabbing Kate-Amadi with a kitchen knife in her residence where he had been invited to repair some electrical faults sometime in 2006.

After the gory incident, Issa was said to have locked himself up with the corpse of the deceased in the house where policemen said they found him hiding in the toilet. However, his counsel, Mr. Yemi Omodele, had urged the court to discharge and acquit his client, on the ground that the prosecuting counsels led by A.O Bajulaye, has no strong evidence against him.

According to the accused, in his testimony, he often went to the deceased’s flat to help her with electrical repairs but that fateful day he went there as usual but was slapped to unconsciousness by one of the two men sitting with the deceased as at the time of his visit. When he regained consciousness he found people in the house surrounding the deceased in the pool of her blood.

The prosecuting party, however claimed that the Consultant Pathologist and Chief Medical Examiner of the Lagos State University Teaching Hospital, Prof. John Obafunwa, was unable to give evidence in the case due to his appointment as “Vice-Chancellor and other administrative issues.” The presiding Justice, Iyabo Kasali, relying on circumstantial evidence presented by the prosecuting counsel, found Issa guilty as charged.

Although the lawyer of the accused maintained it wasn’t fair to convict an accused person simply because he was found at the scene of a crime. Arguing that “it is unheard” that a murderer would intentionally lock himself up in the same room with his victim. He also said the evidence of the first and second prosecution witnesses, PW1, Chief T.I Enyinma, the deceased’s cousin; and PW2, Charles Osuagwu, the deceased’s brother-in-law, was only based on hearsay and not firsthand witnesses.