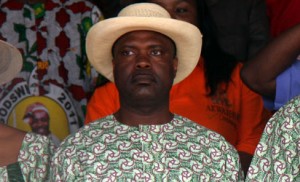 Akwa Ibom State deputy governor, Mr. Nsima Ekere, has resigned from office. The Deputy Governor, was said to have played a fast one on the members of the State House of Assembly who were reported to have perfected plans to impeach him.

He announced his resignation about 6 p.m. Wednesday 31st October, 2012, after news of the moves to impeach him was confirmed by a reliable source. The letter of resignation signed by the Press Secretary to the Deputy Governor, Mr. Inemesit Ina, said that “The Deputy Governor of Akwa Ibom State, Mr. Nsima Ekere, has resigned from office.”

The two-paragraph letter to Governor Godswil Akpabio reads: “Pursuant to Section 306 (5) of the Constitution of the Federal Republic of Nigeria (as amended), I kindly notify you of my resignation from the office of Deputy Governor of Akwa Ibom State forthwith on personal grounds… I want to thank you immensely for the opportunity to serve Akwa Ibom State and wish you and the good people of Akwa Ibom State well in the remaining years of your administration.”

Meanwhile, it was gathered that as many as 20 members in the 26 member House of Assembly had already signed the article of impeachment of the deputy governor. His resignation followed the orchestrated moves by the state House of Assembly to present the article for his impeachment today. The decision to resign it was learnt, was apparently aimed at avoiding the negative constitutional impediment of an impeachment that could jeopardise any political ambition of his in the future.