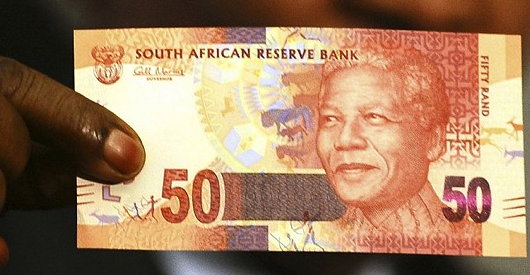 The South African Reserve Bank has rolled out new bank notes bearing the face of the country’s first black president Nelson Mandela. This is the latest monument to the 94-year-old anti-apartheid icon.

According to Governor Gill Marcus “Madiba is really a South African extraordinary human being, and somebody all of us relate to in one way or another… We felt it was time to reflect a new image that builds us. Everyone is excited about the new notes,” she added as she used the notes for the first time.

Marcus said Mandela was happy with the notes which show a smiling Mandela on the front and retain the image of one of the big five animals — lion, leopard, rhino, buffalo and elephant–.which featured on the old money, on the back

Mandela, the revered statesman held office between 1994 and 1999, he is currently living out his retirement in his childhood rural village of Qunu, in the Eastern Cape Province. He is the first black face to appear on South African money.