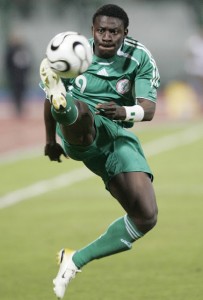 Unlike his compatriot who went on an emotional outburst against football administrators in the country, team coaches, former players and even veiled attacks on present players in the national team, Obafemi Martins has maintained a studied silence on his exclusion from the provisional 32-man list that was released by coach Stephen Keshi that will fight for a place to represent the country at the forthcoming Orange African Cup of Nations in South Africa.

The Levante forward who is in the country for the Yuletide, said he is not disappointed at his exclusion and believes the present crop of Eagles can win the coveted title without him.

“They have a team capable of winning the nations cup without me. I wish them all the best in South Africa”, said Obagoal when he visited a hospital in Lagos on Christmas day on behalf of his foundation.

Martins who has made three nations cup appearances in 2006, 2008 and 2010, said, “I will now enjoy my holidays and then return to Spain to focus with my club.”