The Federal Government yesterday restated that it will re-introduce toll gates on Lagos-Ibadan expressway.

The Minister of Works, Mr. Mike Onolemenmen disclosed this during the tour of North/South road from Lagos-Ibadan road, explaining that government toll taking was necessary to maintain the road.

He said the funds realised from it would be used to “sustain and maintain this road so that it would not go back to the sorry state we met it and similar others across the federation”.

Onolemenmen shortly after touring 52km Oyo-Ogbomoso road which is the section 11 of Ibadan-Ilorin road being handled by Reynolds Construction Company, RCC, said toll gates would be introduced as soon as the on-going reconstruction and expansion works are completed by both the RCC and Julius Berger.

He made more clarifications on the termination of the contract for Lagos-Ibadan road earlier concessioned to Bi-Courteny Highway Construction Services, saying the company failed to meet up with the financial involvement needed to fix the road in the required time.

“I assure you that by the first quarter of next year, you will see a major difference on Lagos-Ibadan expressway,” he said.

The site engineer of RCC, Yehoda Leve assured that the road would be completed by December 2013.

Work has also commenced on the Julius Berger construction end of the road. 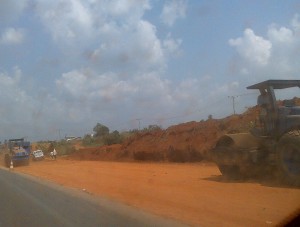 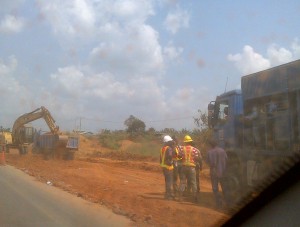