Kogi State Governor, Captain Idris Wada, rtd, has been flown to Abuja in critical condition,  following an auto crash which claimed the life of his Aide-De-Camp, ADC, Idris Muhammed in Lokoja Friday. It was learnt that he would be flown abroad when his condition becomes stable.

Already, the ruling Peoples Democratic Party has directed its members across the country to pray for his survival.

The party in statement issued by its National Publicity Secretary, Chief Olisa Metuh also expressed the party’s deep shock over the accident.

“Our great Party is yet to recover from a rude shock arising from a recent similar incident. We therefore wish to direct all our members to observe compulsory minutes of prayers for the speedy recovery of Governor Wada and to spare the Party from further painful incidents,” Metuh said, and prayed for the repose of the soul of the governor’s ADC  who died in the accident. 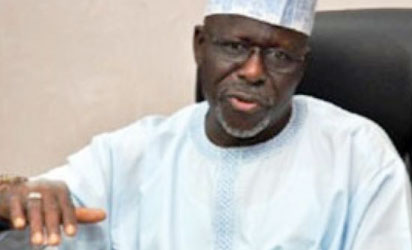 According to sources, the front tyre of the governor’s car pulled out while it was on high speed and the vehicle summersulted several times before ramming into an uncompleted building.

Wada who was returning from Ayingba after attending the Igala Summit was said to have been lucky to survive the accident as his official vehicle involved in the crash instantly became a scrap.

Saturday Vanguard was informed that Wada  who was in a haste to return to Lokoja, the state capital for the Friday Jumat prayer left Ayingba by 1.pm after asking his convoy of vehicles to speed up so as to meet the prayer session. However, the accident occurred at Eleta-Jimgbe (a suburb in Lokoja) which was about five minutes  drive to the Jumat Mosque.

”It was curious. Only the governor’s vehicle was involved; nothing happened to other vehicles in his front nor those at the back,” the sources added.

The source further said that the ADC who was not putting on his seat belt died on the spot as he was flung out while the Governor, his orderly and driver were treated at the State Specialist Hospital, Lokoja, before being flown to an undisclosed hospital in Abuja for further treatment. It was not known when he would however be flown abroad.

A statement signed by the Commissioner for Information, Yabagi Bologi confirmed the incident but added that Wada was ‘’in a stable condition’’ just as he was being well catered for at the hospital, even as  a government house source told Saturday Vanguard said that ‘’all they are doing is just to get him stabilized before he is flown for better treatment.’’