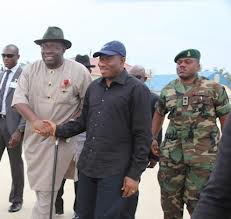 President Jonathan arrived at his Otuoke residence yesterday, shortly before 3:00pm, ahead of the burial of his younger brother on Saturday.

The president was received by the governor of Bayelsa State, Mr. Seriake Dickson, as well as senior security officials, after which members of his family briefed him on the arrangements for the funeral.

The president’s arrival was preceeded by that of the First Lady, Dame Patience Jonathan, who had arrived Otuoke on Wednesday where she took charge of some of the arrangements.

After the briefing by his family members, President Jonathan visited the residence of his late brother where he commiserated with the widow and daughter before leaving for Pa Lawrence Ebele Jonathan Memorial Hall where the corpse is expected to lay in state today.

A sober President Jonathan who came out of his brother’s residence with eyes welled with tears, was then led to the community Town Hall where the community elders are expected to receive the corpse when it arrives from Abuja today.

From the Community Town Hall, the President was led to St. Steven’s Anglican Church where the requiem mass is expected to be held today.