What could easily have marked another bleak Christmas in the ancient city of Kano was averted when operatives of Joint Military Taskforce, JTF Monday in Kano, conducted house-to-house search where they discovered and detonated explosives planted in strategic locations within the metropolis. 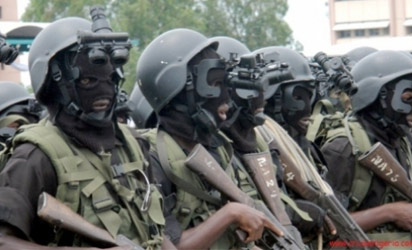 While briefing reporteers in Kano, Commandant of 3rd Motorized Brigade of the Nigerian Army, Brigadier General Iliyasu Abba said “there are desperate attempts by terrorists to instil fear on urban dwellers as most of the latest discoveries were planted in residential areas. The situation compelled us to embark on house to house search on suspected dark spots in the metropolis.”

Brigadier Illiyasu Abba stated that “we have made some arrest and investigation is on and I believe that there will certainly be more discoveries”.

The commandant stated that the “terrorists plan major attack to disrupt Christmas celebration in the city,” noting that  “we have initiated a number of measures to frustrate their plan”.

The army officer called on residents to cooperate with JTF personnel in the line of duty, maintaining that “it is through collective effort that we can triumph against the evil forces.”

“Our cordon and search exercise is going to be a continuous exercise, we know it is inconvenient but it is necessary under the present circumstances and we urge residents to cooperate with our men in the collective interest of all. We are on top of the situation and the residents have nothing to fear and they should therefore go about their legitimate duties without fear or molestation.”