Barcelona defender Gerrard Pique and pop singer Shakira, have welcome their first child – a healthy baby boy – into the world. 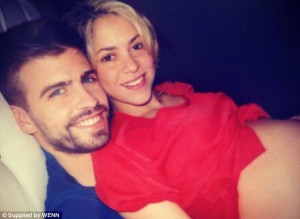 The Spain international, took to Twitter on Thursday, to announce the news, saying they were “very happy”.

“Our son has been born! We are very happy! Thanks to all for your messages!,” he wrote in Spanish.

The Colombian superstar, has taken off work to prepare for delivery and Pique confirmed she will only release an album, after giving birth.

“The album will be released after the baby is born because she’d need to go on tour and she can’t do that now,” he said.

“And it’s very likely that there will be a song in Catalan, it could even be ‘Boig per tu’ (‘Crazy for you’).”

In an earlier interview, the couple confirmed they were expecting a son, but Pique said they had not decided on his name yet.

“Concerning the name, we just haven’t been able to decide,” he said.

“There are ridiculous names, like Ulisito, that came out of the press’ need to report nonsense.

“There was also Biel, which we like, but I don’t think it will be that one either, or Gerard. We’ll see.”