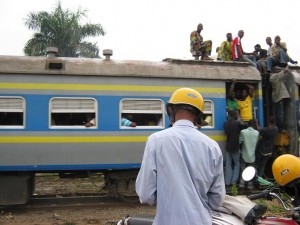 300 people have been arrested by the Nigeria Railway Corporation, NRC, in a bid to step up efforts to combat activities of hooligans on its trains.

The Assistant Director, Public Relations, NRC, Mr. David Ndanusa Ndakotsu made this known on in response to enquiries from  Vanguard last week.

The NRC official in reaction to the problem of overcrowding on the trains in Lagos where some passengers hang and some sit on the roof, described the act as hooliganism and said the authority has been arresting and prosecuting those involved.

“Those who hang on the trains are hooligans. And we have been using the police to arrest and prosecute them. We charge them with attempted suicide. Last year alone, we arrested and charged to court over 300 people. Some of them have been convicted and fined.”

Mr. Ndanusa noted that the overcrowding of the trains is because of the inadequacy of the coaches and said the corporation is making effort to provide more coaches.

“We are aware that the coaches get crowded and that some passengers even hang on the train but we understand that is because the trains are not enough and we are making effort to increase the number of coaches.” Ndanusa said.

“We are increasing the number of coaches gradually. Within the last one month, we have increased it from 10 to 16.” He added.

He however noted that no arrests have been made this year because the authority is still persuading and sensitizing the people through the media on the dangers of hanging on the train.

“While we are trying to curb this hooliganism through arrests and prosecution, we are also giving the fight a human face by persuading the people through the media and community leaders on the dangers of hanging on the train. That’s why we have not made any arrests this year. After we have done that, it is only then that we will begin to arrest and prosecute the extremely stubborn ones.”

The railway has over time played critical role in transportation in Lagos but the recent ban on commercial motorcycle has led to a surge in the rail patronage as an alternative to traffic jammed roads, leading to overcrowding in the trains that sometimes resulting in suffocation of passengers. [Vanguard]