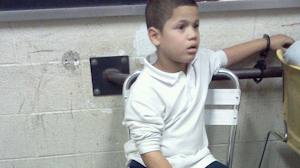 A 7-year-old was detained at a police station after being charged with robbery over a playground scuffle that occurred in December over a missing $5.

According to the New York Post, Wilson Reyes was handcuffed by cops and interrogated for 10 hours (roughly two full school days). Now his family is pressing charges.

“My son was crying, ‘Mommy, it wasn’t me! Mommy, it wasn’t me!’ I never imagined the cops could do that to a child. We’re traumatized,” Wilson’s mom Frances Mendez told the Post. “Imagine how I felt seeing my son in handcuffs! It was horrible. I couldn’t believe what I was seeing.”

Cops cuffed the schoolboy after he was accused of swiping 5 bucks from a fellow student meant for a school trip that never happened. The bill was allegedly found discarded on the floor.
Officers arrived at the scene at P.S. X114 and held the child in a room for four hours before taking him to the 44th Precinct station for another six hours of interrogation and verbal abuse, according to a $250 million claim against the city and the NYPD.

After Mendez’ mom and sister were told they couldn’t see Wilson upon arriving at the station, they eventually found him seated in a dinky white chair with his left wrist cuffed to the wall.