Most of us have a hard time figuring out the ingredients list on processed food labels. What the heck is butylated hydroxyanisole? Any clue what ammonium sulfate is, and what else it’s used for? Well, the answers might alarm you. Read about some of the scariest, and some of the strangest ingredients in processed foods here; maybe you’ll find enough reason to reduce the consumption of processed foods like you might have been advised before. 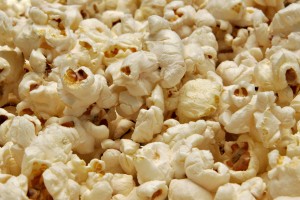 Several Healthy, young and non-smoking males began developing an extremely rare form of lung cancer. What they had in common was that they worked in popcorn factories, and were inhaling diacetyl for extended periods of time. Several manufacturers have voluntarily removed the chemical from their products, and some governments have stepped into regulate the harmful chemical. But it’s more than just a worker safety concern — a man in the United States was awarded over $7 million in damages after his case of the rare cancer was linked to the chemical. Studies have also suggested that diacetyl may be linked to Alzheimer’s Disease.

Just as you might add it to concrete to strengthen it, silicon dioxide is added to various fast food meals to keep it from clumping. Though that does sound pretty gross, it’s important to note that silicon dioxide is generally safe to consume in small quantities.

Formed By: Exposing foods that contain fat and salt to high temperatures during the production process.

Banned in the United Kingdom, Australia and New Zealand, (though not, yet, in the United States), 3-MCPD is toxic to humans and raises your risk of cancer.

Also Used As: A preservative in pharmaceuticals and cosmetics.

BHA is usually used in processed foods to prevent fats from going rancid. Studies have shown that cosmetic lip products that contain BHA are quite harmful, potential increasing the risk for cancer. The substance is banned for cosmetics use in the European Union, and its use is restricted in cosmetics in the U.S. It’s been known to cause cancer in some animals, and the National Institutes of Health believes that it is “reasonably anticipated to be a human carcinogen.”

Also Known As: Red 40, an azo dye manufactured from petroleum.

Found In: Lots of things — sodas, cough syrup, candy, cereal — you name it.

The most common red dye used in foods manufactured in the United States, Allura Red AC is banned or discouraged in several parts of Europe. Why? Well, studies have shown a problematic link between Allura Red C, along with other food dyes, and Attention Deficit Hyperactivity Disorder (ADHD) and other hyperactive disorders. The dye has also been linked to an increased risk of cancer.

Also Known As: Extract from the perineal glands of beavers.

Don’t worry — this stuff is very uncommon in the United States. As a whole, the food manufacturing industry produces about 300 pounds of the stuff annually.

Found In: Some bread and flour products.

Ammonium sulfate is added to some bread and flour products to regulate acidity, particularly in breads at fast food restaurants. It’s generally safe to eat.

More allergic reactions are caused by tartrazine than any other food dye. Though intolerance to the chemical is thought to be quite low, for those who are intolerant, symptoms like migraines, depression, itching,and blurred vision have all been seen. It’s not entirely clear whether people who aren’t intolerant experience negative consequences from ingesting yellow #5, some research has suggested a link to behavioral issues, cancer and damaged organs. It’s banned in some areas of Europe, but legal (and regulated) in the United States and Canada.

We Can’t Continue To Depend On Other Countries For Vaccines, Says Fashola