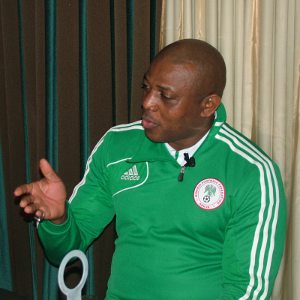 Reports making the rounds that head coach of the Super Eagles, Stephen Keshi, along with his assistants, are being owed salaries and other financial entitlements, has been debunked by the Nigeria Football Federation.

Barrister Chris Green, executive committee member of the NFF, also disclosed that the Federation had never owed Keshi or any of its coaches salaries.

informationng.com quotes Green as saying, “The NFF is not owing Keshi salaries and we have never owed him in the past. We have seen reports in some sections of the media claiming we owe the coach salaries but these stories lack facts and substance.”

The NFF top brass also revealed that bickerings between players and the NFF which have severally threatened to rock the Super Eagles in the past will not be experienced in South Africa.

“As I speak to you, we have paid all camp allowances and other financial entitlements to all the players in Faro, Portugal. Morale has never been higher among the players and we are confident they will recompense our efforts with a good showing at the AfCON,” he said.