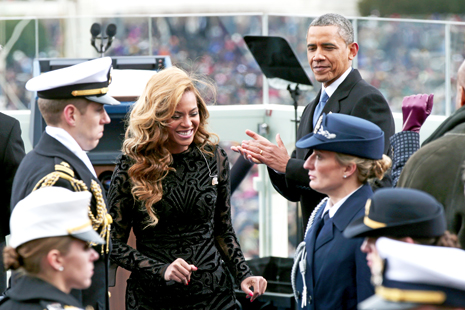 If Nigeria’s President Goodluck Jonathan thinks his political opponents are some of the harshest and most unreasonable, he should wait till he hears this one – some congressional Republicans are calling on U.S President, Barack Obama, to acknowledge that former Destiny’s Child singer, Beyoncé, lip-synched during his inaugural event on Monday and resign from office, effective immediately.

According to Sen. Rand Paul (Republican-Kentucky), “synching the national anthem, Beyoncé has cast a dark cloud over the President’s second term. The only way President Obama can remove that cloud is by resigning from office at once,” he said.

Although media reports have been careful not to heap any of the blame for the lip-synching controversy on Mr. Obama, Sen. Paul said, “We must remember that this happened on President Obama’s watch.”

The Republican Senator also slammed the White House for maintaining silence in the face of the Beyoncé crisis saying it “only serves the argument that this President has something to hide.

“If Beyoncé lip-synched the national anthem, how do we know President Obama didn’t lip-sync his oath of office?” he said. “If that’s the case, he’s not legally President. But just to be on the safe side, he should resign anyway.”