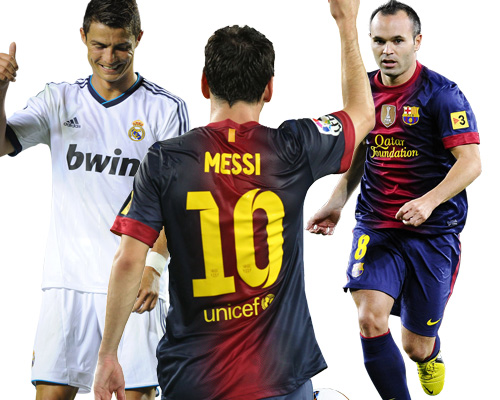 The countdown to the highly prestigious and anticipated 2012 Ballon D’or at Kongresshaus, Zurich, Switzerland, has commenced. 7th January, 2013 is the day the International Federation of Association Football (FIFA), awards the ‘best player of the year’ with the FIFA Ballon d’Or.

Previously two separate awards, the FIFA player of the year award and the Ballon d’Or, these merged in 2010 to form the FIFA Ballon d’Or and three exceptional players are in the race to wear this coveted crown – Cristiano Ronaldo (Portugal/Real Madrid), Andres Iniesta (Barcelona/Spain) and Lionel Messi (Argentina/Barcelona).

Following that the FIFA Ballon d’Or is an award of individual merit, Messi is favourite to clinch the prize after consecutively winning the last three editions. What’s more, momentum is certainly one thing working in Messi’s favour as his individual performance in the year under review has been nothing but phenomenal.

But then, we ask, who are you placing your bet on to win the award? Will it be the dazzling Cristiano Ronaldo, the magical Andres Iniesta or phenomenal wonder kid, Lionel Messi?