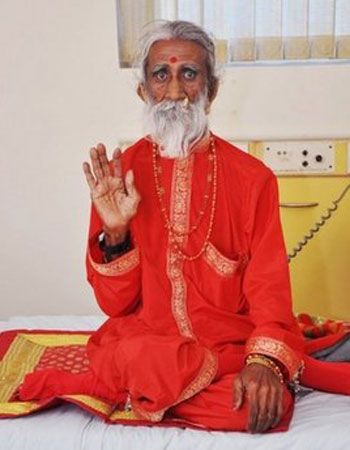 Indian doctors are studying an 83-year-old holy man who claims to have spent the last seven decades without food and water.

The long-haired and bearded yogi is under 24-hour observation by a team of 30 specialists during three weeks of tests at a hospital in the western Indian city of Ahmedabad.

Two cameras have been set up in his room, while a mobile camera films him when he goes outside, guaranteeing round-the-clock observation.

His body will be scanned and his brain and heart activity measured with electrodes.

“The observation from this study may throw light on human survival without food and water,” said Dr. G. Ilavazahagan, who is directing the research. “This may help in working out strategies for survival during natural calamities, extreme stressful conditions and extra-terrestrial explorations like future missions to the Moon and Mars by the human race.”

Since the experiment began on April 22, Jani has had no food or water and has not been to the toilet.

“The exercise of taking this yogi under the medical scanner is to understand what energy supports his existence,” Ilavazahagan added. “Jani says he meditates to get energy. Our soldiers will not be able to meditate, but we would still like to find out more about the man and his body.”

Jani, who dresses in red and wears a nose ring, grew up in Charod village in the Mehsana district in Gujarat.

He claims to have been blessed by a goddess when he was 8-years-old, which has enabled him to survive without sustenance.