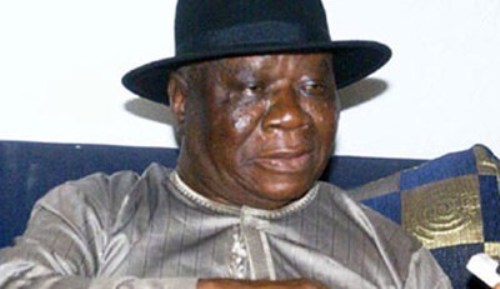 Frontline Ijaw leader, Chief Edwin Clark, on Thursday, descended on the Nigerian Governors Forum (NGF), alleging that it has become an appendage of former president, Chief Olusegun Obasanjo, “who is always visiting any of the governor that speaks ill of President Goodluck Jonathan.”

This is just as he accused the governors of dictatorial tendencies worse than the military because of the way and manner they were running the affairs of the forum and opposing the government of President Jonathan.

Clark said the governors’ forum was trying to enforce its authority over the president, adding that the forum was not happy with the national chairman of the party, Alhaji Bamanga Tukur, “because he is not from their ranks.”

He also added that the plan of the forum was to upturn the leadership of Tukur and install someone from their rank as the national chairman of the party.

According to him, “the Governors’ Forum is now acting as an opposition party to the Federal Government. It deliberately breaches with impunity the Constitution of the Federal Republic of Nigeria and that of the PDP without any challenges.

“The forum has now become a threat to the peace and stability of Nigeria. Most of the governors today are more dictatorial than the then military governors.

“I have seen and made enquiries about counterparts in the United States of America (USA). A governors’ association called the National Governors Association (NGA) does exist, but their existence and operations are practised and operated within the confines of the law of the land.

“I do believe that when the Nigerian Governors Forum was first formed in this country, under the chairmanship of the then governor of Enugu State, Dr Chimarome Nnamani and later passed on to ex-Governor Victor Attah of Akwa Ibom State and Lucky Igbinedion of Edo State respectively, the forum behaved like their counterparts in the USA.

“Even in the 2003 presidential elections, the former vice-president, Alhaji Atiku Abubakar, did not use the forum to challenge his boss. Rather, he passed through Chief James Ibori, the then governor of Delta State and 16 others.

“During this period, Nigerians hardly took notice of their existence. However, a change came when Dr. Bukola Saraki used the forum as a platform to achieve his presidential ambition.

“The ugly truth is that today, the PDP is no longer in control of its various organs and for some time now, proper elections at congress and conventions have not been held democratically due to the imposition of unqualified members on the good members of the party, contravening Section 87(4) of the Amendment Electoral Act 2011 and the Independent National Electoral Commission (INEC) Law.”

Chief Clark while also blaming the Governors Forum for fueling the crisis in the Adamawa State chapter of the PDP, also laid some share of the blame on the selfish interest of Tukur, Nyako and Abubakar, who wanted their sons to become the next governor of the state.