The Human Right department of Ilemba Hausa Police Division, in Ojo area of Lagos has arrested a 49- year-old man who allegedly had been having carnal knowledge of his teenaged daughter for five years. 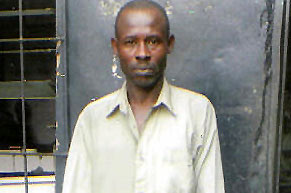 It was discovered during investigation that his daughter Janet(not real name)got pregnant in the process twice, only for her father to allegedly abort the pregnancy with the aid of a herbalist.

Sitting at a corner in the Human Rights Office, 17-year-old Janet could not raise her head to face her father, Wale Akinusi, who was also there. When approached, she simply stated that at last, she had been freed from the psychological trauma associated with her father’s sacrilegious act.

Crime Alert gathered that Janet’s tale of woe started after her mother abandoned her barely when she was two-year-old for her paternal grandmother.

It was gathered that her mother who was then a Junior Secondary 3 student, was impregnated by Wale who was 32 years old. Initially, he reportedly denied paternity of the pregnancy but later opted for an abortion on the ground that he could not afford to father a child then because he was only an apprentice.

But his mother came to the rescue as she offered to take care of the baby who turned out to be Janet.

But when she was 12, her father, reportedly took her from her grandmother, with a promise to give her a better education.

Rather than live up to his promise, her father, allegedly use her to satisfy his sexual urge, a practice that went on until he was arrested.

Narrating how it all started, Janet in her sitting position with her head bowed all through, said: “When I was leaving my grandmother’s house, I was happy because my father said I would be attending a better school. But I waited for months without being enrolled in any school.

“One night, then, I was 12,my dad called me into his room and told me he took an oat with my mother to be the first man to have sex with me. He said it had a spiritual connotation and that it was to enable him assume his proper financial state.

First pregnancy aborted by a herbalist

“It continued until I was 14 years. Then, I started having a funny feeling. I told him I was sick and when we conducted a pregnancy test, it was positive. Next day, he told me we were going somewhere and we ended up in the home of a herbalist in Ikorodu, who gave me some concoction. I drank some in his apartment and took the rest home. After two days, my menstruation started and my father assured me all was well.

He only gave me a week’s break before he continued all over again. Two years later, when I was 16 years, I got sick again. When I informed daddy, we went for another pregnancy test which confirmed my fear; I was pregnant again!

When he returned next day from his shop, he told me there was no need to go to the herbalist. Rather he gave me two sachets of Alabukun and squeezed some lime juice into a cup, asking me to take it in a gulp. It did the magic and the menstrual flow started few days later.”

“After the second abortion, I became tired of the whole thing. I started being afraid every night. At times, I would put tissue paper under my panties , pretending I was witnessing my monthly flow. After a while, he got the trick, for he started taking note of the date.

“I summoned courage and reported the sacrilegious act to our neighbors. But none of them could confront him. Rather they told me they could not interfere into our family affair” , she stated, with her head still bent.

Apparently discouraged by the cold reaction from the neighbors, Janet decided to take the bull by the horn. Looking straight into his father’s eyes for the very first time since the sacrilegious act started, she told her father she was tired of the whole thing. To make do her threat, she reportedly rushed to the kitchen, grabbed a knife and threatened to stab him if he attempted to force her.

“This happened on November 28, 2012. My father had come home from his shop . And at about 6pm, he called me inside to warm his bed. But when he saw the knife, he retraced his steps. I quickly ran inside my room , with the knife in my hand and packed my things out of the house, to stay with a friend whose family welcomed me after I narrated all that has been going on in the past five years.”

“After spending three weeks with them, I received a text message from my father, asking me to come home, or I would die. When I showed the text message to the family I was putting up with, they suggested I reported the case to the police. I hesitated at first because I was scared he would be jailed.

“But I changed my mind when the text message threat continued”, she said.

I did that to appease the gods – father

When approached, it was obvious that 49-year-old Wale Akinusi, a fashion designer who hails from Ondo central in Ondo state was oblivious of the legal implication of the offense, as he showed no sign of remorse.

He bluntly told this reporter that what he did was not new under the sun, adding that this would not be the first time such story would be published on the pages of newspapers.

“It is not a new thing that a man has sex with his daughter and even if I am jailed at the end, I will surely come out after serving my jail term. But I promise that my daughter will join me” he threatened, dismissing the issue with a wave of the hand.

Continuing, he said: “I went back to claim my child so as to fulfill the oat made between her mother and I. That was why I took her to the herbalist when she was pregnant, so as to appease the gods of her mother’s land. You will not understand.

“You see, when her mother was six months pregnant, we made love. She later told me that it was a taboo for a man to sleep with a pregnant woman in her place. She said the only remedy was for the man to be the first person to sleep with the child.

“I initially did not want to do it. But along the line, I discovered that things were not going on well with me financially. And when I made inquiry, I was made to understand that I had to appease the god’s of her mother’s land, so as to attain my rightful place in destiny.”

Asked why he continued after the first time, he kept mute. Also asked why he did not satisfy his sexual urge on his wife who has had four children for him, he explained that they were leaving apart.

“My wife lives in Ketu with the children while I live in Ojo. I had to live apart because I do not want my wife and children to suffer the consequences of my sin. Also I did not want my wife to know I was sleeping with my own daughter”, he said.

Meanwhile, effort according to sources at the Human Rights department, was on to arrest the herbalist who allegedly gave Janet the concoction that aborted her first pregnancy,while her father would be charged to court.