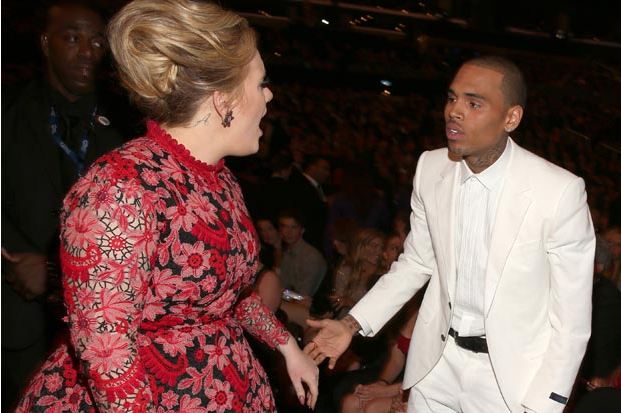 The star looks like he’s on the receiving end of almighty tongue-lashing from Adele – just moments after he snubbed Frank Ocean by sitting through a standing ovation for his rival at last night’s Grammys.

Brown and Ocean have been bickering for weeks and came to blows last month after bumping into each other outside a Los Angeles recording studio.

Neither of the pair pressed charges following the fist fight – but Brown clearly hasn’t got over the spat.

When Ocean pipped him to the Best Urban Contempary Album award, the whole audience rose to their feet to applaud him – except bad loser Brown, who stayed planted to his seat in a sulk.

As TV cameras focused in on his protest, Adele could be seen across the aisle, glaring in his direction.

And when the applause died down, the 24-year-old cornered him for a tense one-on-one.

The 23-year-old held his arms out as open-mouthed Adele let loose.

She might have been suggesting he keep a lower-profile at the event – which marks the fourth anniversary of his arrest for assaulting Rihanna after a pre-Grammys party in 2009.

Instead of keeping his head down, the star picked the biggest night of the music calendar to make his first public appearance with Rihanna since the pair rekindled their controversial romance.

The pair cuddled up on the front row at the event, just days after she joined him in court – where he was accused of faking papers logging the community service he was sentenced to after admitting his vicious attack on Rihanna.

It was a better night for Adele – who won her NINTH Grammy for 007 theme song Skyfall.