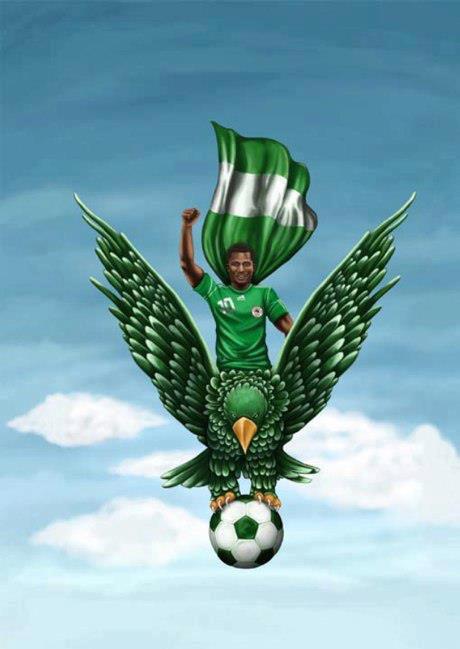 Let me start by saying that a reasonable fraction of us now celebrating the eagles exploits at the just concluded African Soccer showpiece in South Africa should be burying our heads in the sand even as we celebrate reason being that, at the beginning of the tournament, the support we had for the team was too meager to match what they have now achieved as the tournament comes to a halt. Only a little few were able to stand by the eagles before the tournament reached its tentacles because they thought it was going to be the same disappointment that has always been the order of the day in the recent past. Yes, before now, the rumbles in our football houses have grown into a double jeopardy in that it affects the way the boys play in the pitch whenever they are called for any national foot baling duty and has extended to rob us of the conviction or confidence we have in our national team. Thank God for this new era and I am so gladdened at what the head coach, Stephen Keshi has been able to achieve in a very short time. Many Gbosa! to him and may victory continue to be his portion in Jesus name, Amen.

The team’s first match against their would-be opponents at the final match of the tournament (Burkina Faso) was all I needed to give my nod for this fantastic team. It’s been long since I saw such team work and cohesion from our national team and all I could do was throw my weight behind them, put my money on the line for them hoping I wouldn’t be disappointed at the end of the whole fiesta and to my bewilderment the eagles didn’t disappoint me rather they flew and flew and flew higher again putting smiles on the faces of football loving Nigerians who have suffered too many psychological and emotional trauma when it comes to the football sector.

It is way too ironical to note that in an event which the Nigerian government refused to secure the viewing rights so that Nigerians who cannot afford the cost of foreign channels to partake in the tournament would be able to watch from the comfort of their homes through the local channels, although because of a justifiable reason- the high cost of securing the viewing right which was fixed at different prices for reasons the organizers are yet to explain now became the one that saw us bring back the coveted trophy home. God does not sleep and every disappointment is always a blessing.
Coach Stephen Keshi no doubt deserves a paramount mention in the whole success of this team. He has proven that he was tactically a part of the team that brought the trophy home the last time it touched the Nigerian soil way back in 1994. He has also shown that he has won this trophy with the Malian side and can still do it again for his home country and now that he has just done and will do more as the race to the world cup finals gears up. His faith and believe in the local lads who ply their trade in the Nigerian premier League, shows that he has everything a coach needs and that he has had an in depth analysis and understanding of the crisis bedeviling the national team which is fanning the embers of mediocre against meritocracy and immediately he took over the helm of affairs, he made his would-be team open to all whether home or abroad based on excellence and performance. Thus we saw many big names not shortlisted for the final 23 man squad bur rather few of such names and many of the home boys who have gotten somnolent of running up and down the sandy pitches of the local league and yearning for an ease of life outside the shores of the country. Boys who were ready to give their all for the sake of the green white green colors of the national jersey and true to their words, they have done it. The likes of Ogenyi Onazi, Obaobona, and Ahmed Musa inter alia are all testimonies to this premise.

The just concluded tournament should be of different lessons to us as football fans, the government under the aegis of the national sports commission, the Nigerian Football Federation and other stakeholders in the sports sector. It is true that we may have conquered Africa again and regained our spot as the number one foot balling nation in the continent, but it also means hard work to be able to contain the pressure of being at the top. We have endured enough and let me presume we have been working and planning for what we have achieved but we want to achieve more so we should not rest on our oars.

For the Confederation Of African Football (CAF), let me say a very big kudos to you for a successful sporting event conducted and delivered within a time frame too short, it shows that Africa is capable and can do more if dared to. Even though one or two technical issues were encountered during the tournament, it is not peculiar to Africa as it is always a common occurrence in most world or continental sporting events but nevertheless as we forge ahead, it is expected we try to improve and do more than what we have done in the past. Whatever the case may be, one thing is incontestable and that is, that African football is growing everyday and we are happy about it.

To these boys who have made us proud, we cannot thank you enough. I never knew Nigerians can still be as cheering as they were yesterday when it became clear the cup was coming home. All thanks to your display and your ability to absorb pressure at those moments when it mattered most. We cannot thank you enough and as you enjoy your dinner with the presidency tonight and relish the wonderful moment at the tournament, all of us at information Nigeria say a warm welcome to you and journey mercies as you depart to your various destinations. God bless Nigeria and thank God the eagles are flying again.
@yung_silky