Home National News Odd News Bizarre: 101-year-old Wakes up as She was about to be Buried, Considers...
Facebook
Twitter
WhatsApp 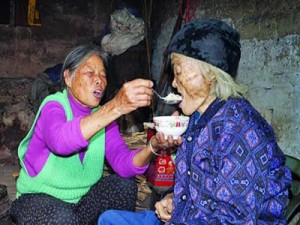 How do you describe a situation whereby a centenarian who had been considered dead wakes up at the point of being buried? Mourners nearly died of shock when a 101-year-old woman sat up and spoke as she was being put in her coffin. Peng Xiuhua asked why so many people were in her house in Lianjiang, Guangdong province, China.

The old woman, who lived alone, had taken a tumble and hurt herself so her two daughters, who are in their 70s, were looking after her.

However, 10 days later her daughters could not detect a heartbeat and her body had gone stiff so she was declared dead.

The daughters gave her a bath, an undertaker dressed her and they were about to put her in her coffin when she came back to life. Peng said: “I am a lucky woman…Not only did I get to see how many people care for me, but I also woke up before they took me to the crematorium,” she said