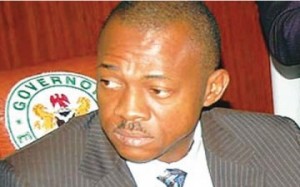 According to Akpabio, Governor Chime would return to the country in the next 10 days. Akpabio disclosed this while speaking with journalists on arrival from London, United Kingdom, at the Murtala Mohammed International Airport (MMIA), Lagos. Being one of the three other governors who visited the sick governor in his hospital bed in London, recently, he declared that Chime was hale and hearty and capable of ruling the state upon his arrival.

The Akwa Ibom governor then admonished Nigerians to always trust their representatives and warned against playing politics with people’s health: “I was a part of the delegation that visited the governor in London and I brought a message of goodwill to His Excellency, the Governor of Enugu State; and like I said, we must learn to mourn with those who mourn and rejoice with those who rejoice. We should not play politics with people’s health.

“I’m very grateful to God that Governor Chime has recovered fully and he would be assuming duties within the next 10 days. It’s not something that any Nigerian should be sad about, rather, we should be happy because he’s returning to the country within 10 days from today and he would be in the Government House in Enugu. I can confirm that,” he affirmed.