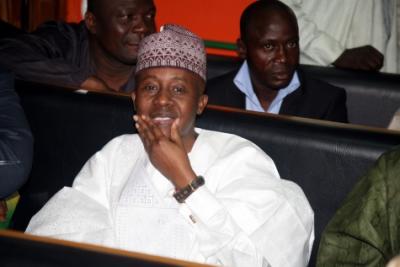 Embattled former Chairman of the House of Representatives Ad Hoc Committee on fuel subsidy regime, Farouk Lawan, and secretary of the committee, Boniface Emenalo have been granted bail by an Abuja High Court. The two men can now breathe the air of freedom after they were remanded in Kuje prisons for a week.

They are being prosecuted by the Federal Government for collecting $620, 000 (N93 million) as bribe from business man, Femi Otedola, to remove his company, Zenon Oil, from the list of indicted companies.

The Judge, Mudashiru Oniyangi, granted them bail in the sum of N10 million each and two sureties each in like sum.

The accused were also directed to submit their international passports with the court registrar, adding that they can only travel outside Nigeria with the permission of the court.

The Judge based his decision to grant bail on the discretionary powers of the court and the inability of the prosecution to file a counter affidavit to the one filed by the accused persons detailing their reasons for asking for bail.

The case was adjourned till April 10 and 17 for further hearing.