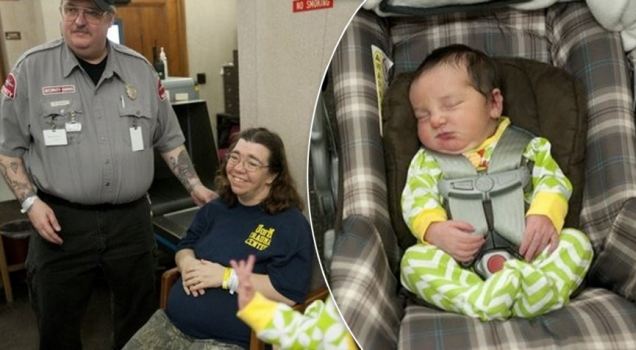 Turns out the suspected “hernia” was a baby girl ready to make her big debut. According to mylive. Ackley was completely clueless about her pregnancy until she and her husband, Mike, went to the hospital.

The couple had long believed they could not get pregnant. Linda hadn’t experienced significant weight gain and her menstrual periods had “always been irregular” according to News.

When Linda arrived at the hospital complaining of bloating of her abdomen, doctors thought it may be a hernia and ordered a scan. It was then that medical staff discovered a full-term baby in the womb.

An emergency C-section was ordered and Kimberley Kay Ackley was born. “I was happy and shocked at the same time, and scared,” Mike Ackley told MLive. He said he wished somebody had taken a picture of his face when he heard that Linda was going to have a baby.

Linda said it was a good thing he was sitting down. “Some people have nine months to prepare. I had 15 hours,” the new father said. He and Linda, who met in high school, have been married for 24 years.

In 2011, Linda contracted necrotizing fasciitis, a serious type of bacterial infection. Mike Ackley told MLive that doctors didn’t think his wife would live. While the Ackley’s story is spectacular, it isn’t terribly uncommon.