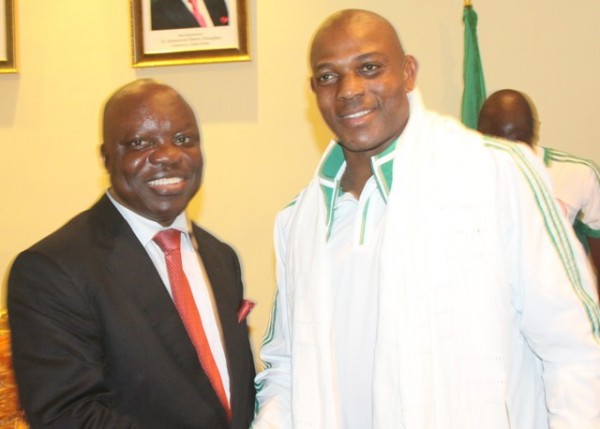 There appears to be no end in sight to the various rewards awaiting the victorious Super Eagles for emerging champions at the just concluded African Cup of Nations in South Africa as state governments, Multi-national companies, individuals and sponsors are falling over themselves to host the team

Delta State governor, Emmanuel Uduaghan, while hosting the chief coach of the Super Eagles, Stephen Keshi – an indigene of the state, along with members of the technical crew and home based players who paid him a courtesy call in Asaba, the state capital, congratulated the team for winning the championship.

He also commended the Keshi for his resilience and patience in giving his best even when people doubted the ability of the team to deliver.

Dr Uduaghan announced that the state government has allocated a plot of land to the team coach Stephen Keshi and promised to put up a befitting structure for him. Also, Mr. Uduaghan named the Asaba stadium after Keshi.

Not done yet, Keshi was also given N8 million cash reward. His assistants; Dan Amokachi, Sylavnus Okpalla, and Ike Shorunmu got N4m each while each player got N 2.5m cash.

Members of the team who were old and present players of Warri Wolves FC got N5million. The beneficiaries are Sunday Mba, Chigozie Agbim, Azuibike Egweke, and Brown Ideye.