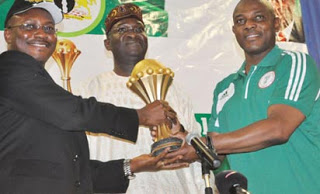 The Naira rain on the victorious Super Eagles who emerged champions of Africa at the just-concluded African Cup of Nations (AFCON) in South Africa is still pouring.

This is just as the Lagos State Governor, Babatunde Fashola on Friday became the latest to shower the team with cash – a whopping sum of N59 million.

A breakdown of the figures shows that chief coach of the team, Stephen Keshi, got the largest share with N2.5 million; while his immediate assistant, Daniel Amokachi, got N2 million and captain of the team, Joseph Yobo, N1.5 million.

Four other assistant coaches got the sum of N1.5 million each.

A further breakdown shows that the 22-strongman squad got the sum of N1million each and N500, 000 for each goal they scored during the tournament (11 goals in all), while N15 million was donated to the backroom staff of the Super Eagles.

Not forgotten in the latest largesse is the Dr. Rauf Oladipo-led Supporters’ Club who also got N4.5 million, bringing the sum total to N59 million. 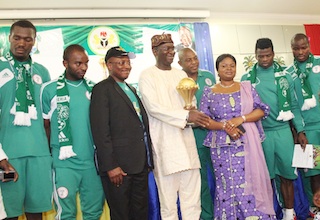 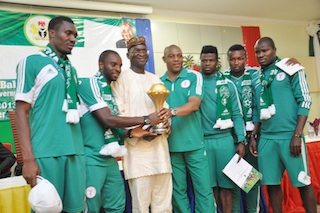