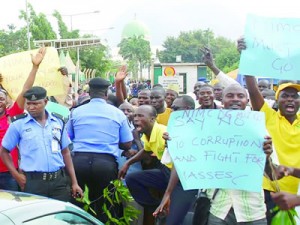 Members of staff of the National Identity Management Commission (NIMC), in the early hours of Tuesday, stormed the National Assembly Complex in Abuja grounding all activities and locking out the President of the Senate, Senator David Mark, Speaker of the House of Representatives, Alhaji Waziri Aminu Tambuwal, other lawmakers, staff and visitors to the complex.

The protesters, in their hundreds, stormed the assembly complex with sleeping mats, beddings and their kids, and they vowed not to vacate the premises until their demands were met. The demands were, among other things, the sack of the Director-General of the Commission , Mr Chris Onyenema, by the Federal Government over the sack of over 4000 staff without following due process, reinstatement of the affected staff or payment of their full benefits.

Armed with placards, they demanded that the DG be immediately relieved of his position as he was alleged to have swindled the agency through various acts of commission and omission.