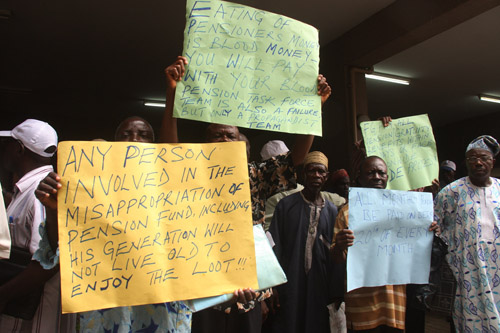 Nigeria Union of Pensioners (NUP) said in Abuja on Tuesday that its planned nationwide protest would begin on Feb. 25.

The National President of NUP, Alhaji Ali Abatcha, told newsmen that a meeting at the instance of the Minister of Labour and Productivity, Emeka Wogu, ended in a deadlock.

He said the meeting was attended by representatives of the Head of Service of the Federation, the Ministry of Justice and others.

Abatcha said the union is seeking the release of the one per cent check-off dues which members voluntarily contributed, “but seized by the Pension Reform Task Team.

“The meeting ended in a deadlock because none of our demands was met. We are also demanding the 53 per cent increment, which civil servants have been enjoying for the past three years, among others.”

Abatcha, however, said the meeting was adjourned to Wednesday, Feb. 13.

“The Minister told us to come back by Feb. 13 so that the Salaries, Income and Wages Commission can explain why the circular is yet to be released. For the check-off dues, the Ministry of Justice said we don’t have the right to levy our members but we told them it is not levy but a voluntary contribution.

“We will not accept a situation where genuine pensioners are suffering without their entitlements being paid, and the Chairman of the task team is claiming to be saving money for government.” (NAN)