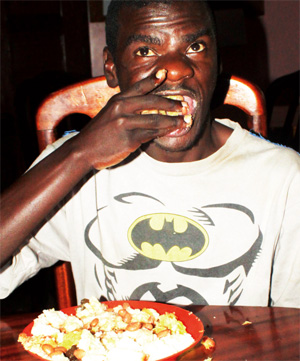 His story began in 1985 when NRA soldiers discovered him in the forest, with his adoptive family – a pack of monkeys. A replica of the fairy tale, The Jungle Book, Robert Mayanja has since been rehabilitated among humans, but still has tendencies of the animal he was raised to be.

He strains his legs as he walks, with his mouth full of grass. His tongue hangs out as he constantly moves from place to place, looking for privacy. He is short with small feet. It is his wrinkled mature face that shows his estimated age.

As I stretch my hand to greet him, he forcefully reaches for me; with wild gestures and moves that make me freeze in utter shock, before instinctively jumping away. But that does not deter Mayanja from following me.

“Do not run, he just wants to hug you. It is his way of greeting and showing love to people. Robert greets with the language he knows best, which is a powerful hug,” Monica Angeyo, the director of L’Arche, where Mayanja lives, explains.

L’Arche is an NGO in Busega, Kampala, which took on the boy who was rescued from the jungle over 20 years ago. It offers physiotherapy and occupational therapy to mentally handicapped children and young adults.

Mayanja was raised by monkeys until he was six years old. His story dates back to the early 1980s, during the civil unrest at that time. Except for his birthplace, known to be Luwero, nothing more is known about Mayanja’s birthday, parents and early childhood.

The only available history starts when soldiers of the National Resistance Army found him in a forest in 1985, with a pack of monkeys.

It is believed that his parents were killed in 1982 during the war and the boy was abandoned in the forest. He was believed to be about three years old when he was left alone and lived in the wild for another three years.

As the soldiers roamed about the bushes, they spotted what looked unmistakably like a human being among the monkeys. They had to disperse the monkeys in order to rescue the boy, but it was a struggle because the monkeys put up a fight.

One adult female monkey held Mayanja tightly to her bosom in an attempt to protect him.

Angeyo says according to reports from those who rescued him, while in the wild, Mayanja survived on fruits, berries and roots and learnt all the mannerisms of the monkeys that adopted him.

When he was found, he could not sit or stand, but only squat and jump. He neither smiled nor talked, but made jungle noises, which quickly got him a new name — Monkey Boy.

In the beginning, it was a struggle to take him through the bathroom procedure, but now it is his favourite activity. Though he cannot dress himself, he voluntarily lifts his legs in turn to wear trousers and stretches out his hands for the shirt.

He does not know where to keep his clothes, though.

He is pictured right with other members of the L’Arche community.

Mayanja joined L’Arche community on July 5, 1991. He was about 12 years old. Since the date of his birth was uncertain, L’Arche Community created one for him, which is July 5.

His birthday is celebrated every year and Mayanja probably knows it as the day he gets to wear nice clothes.

Doctors described Mayanja as an autistic child; living in his own world. At the time he was rescued, he had a dull personality and would not respond easily to human beings. He would swallow food very fast without chewing.

“Mayanja has learnt rudimentary life skills like toilet manners. He knows when it is time for toilet and does not soil himself. He walks to the toilet door and waits for someone to help him,” Angeyo says.

He likes sunbathing and staying in isolation and sometimes makes monkey-like sounds. Mayanja wakes up in the morning and looks for a comfortable spot on the ground, folds his arms and legs and lies on the ground to enjoy the sun.

Sometimes, he picks grass and puts in his mouth. When he walks, his posture is the slight hunch of an ape. Mayanja sees well, but hardly notices the other children around him, and on a bad day, he walks over them if they are in his way with no smile at all.

He is now accustomed to the routine of the community. Wake up time is 6:00am. He jumps out of bed then stops, goes to the toilet and then the bathroom, where he waits for the care assistant to bathe him since he cannot bathe himself.

“After bathing, Mayanja sits in the dining room waiting for breakfast and if it is delayed, he moves to the kitchen to make his presence known, before going back to the dining table.

Initially, he could not sit on the chair and had to be tied to it during meals but now he comfortably sits down and waits to be served,” Angeyo relates. Among other things, he has learnt how to chew as he eats as pictured below left. Initially, he would swallow food without chewing it.

“Robert is emotional and gets excited when he hears the sound of drums and shakes his head. He makes sounds to indicate feelings of pain, hunger or happiness. He cries when he is hurt and dances when he is happy, since he does not talk,” Angeyo explains.

Angeyo says Mayanja has a long way to go; he still needs a lot of help from the physiotherapist and occupational therapist.

“We have had many people come here to get Mayanja’s information with promises that they are getting for him doctors to help, but none of them comes back,” Angeyo says, adding that even those who brought Mayanja to the centre have long stopped being concerned about his welfare.

Help for special needs The L’Arche community in Uganda started in 1991 and supports 19 people with learning disabilities and a further 20 disabled people are welcomed in the day provision service.

Those with special needs are equipped with vocational or technical skills like carpentry and playing music instruments, which have boosted their self-esteem and potential to earn a living.

Most of the children and young adults at the centre are orphaned or abandoned because of the stigma. Angeyo says they could do with financial support from the Government.